Famous Italian Luxury Brand House Gucci has announced this week they will accept payments in cryptocurrencies throughout their direct outlets in the U.S.A. in stages.

The cryptocurrency payment integration will be effective from the end of this month.

Initially, 5 of Gucci’s direct outlets are to come under this payment system, and by the summer of this year, all Gucci outlets throughout the U.S.A. will have cryptocurrency payments option available.

Gucci stores and the Cryptocurrencies

The outlets of Gucci that are to provide the initial cryptocurrency payments option are at Rodeo Drive in Los Angeles, Wooster Street in New York, Phipps Plaza in Atlanta, The Shops at Crystals in Las Vegas, and Design District in Miami.

The cryptocurrencies that will be accepted at Gucci outlets include more than 10 different cryptocurrencies: Bitcoin, Ethereum, Bitcoin Cash, Litecoin, WrappedBTC, meme coins Dogecoin, and Shiba inu, and 5 more Stablecoins.

Gucci’s customers who are willing to pay via cryptocurrencies will be provided a QR code through email, which, upon scanning through a QR code reader on the smartphones will provide the customers a wallet address to send the crypto payment.

QR code or Quick Response code is a technology from the 90’s and is similar to a Barcode in black and white. QR codes are in squares of more numeric characters, unlike the rectangular Barcodes.

QR codes can hold up to 2,500 numerals whereas Barcodes have up to 43.

Website URLs, locations, names, wallet addresses, and many more can be simplified into QR codes that are readable by a smartphone’s QR code reader’s gesture.

“Gucci is always looking to embrace new technologies when they can provide an enhanced experience for our customers. Now that we can integrate cryptocurrencies within our payment system, it is a natural evolution for those customers who would like to have this option available to them”.– Commented the President and CEO of Gucci, Marco Bizzarri. [source – Vogue Business] 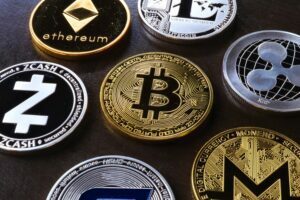 Gucci is already in use of the virtual world of Web 3.0 by involving into NFTs [Non-Fungible Tokens], the cryptographical digital arts and media system. They have a team specially built for the purpose of accessing the Web 3.0 technology, training people, and managing the platforms such as Discord and NFT spaces.

Cryptocurrency and its worldwide adoption

Gucci’s acceptance of crypto payments is another example of a high-profile Brand participating in the worldwide adoption of cryptocurrencies.

Several sports stars, celebrities, and influential personalities are already into cryptocurrencies. The nations of El Salvador and the Central African Republic have accepted Bitcoin as a legal tender last year.

The nation of Tonga was to follow the same but their plan was postponed due to the disastrous submarine volcanic eruption of Dec 20, 2021, followed by a Tsunami.

All these movements in favour of cryptocurrencies are little wins over the centralised authorities, entities, and states who have been opposing the cryptocurrency system all along; but these are big steps forward to the decentralised world of Web 3.

- Advertisement -
Previous article
What Is ApeCoin And How Does It Work?
Next article
Evolution of Money: The Fiat Currency