Every trader has recollections of transactions that seemed extremely obvious to them before they entered them, but once they were in the trades, the trades turned against them and resulted in losses.

These types of transactions are referred to as “trap trades” because they tempt traders who aren’t paying attention and then take advantage of them after they’ve taken the bait.

The bull trap is known to be one of the most prevalent kinds of trap trades that traders are familiar with. In this article, we are going to define a bull trap, examine how to identify one, discover how to avoid them, and then discuss several ways in which it might be feasible to make a profit by trading in bull traps.

What is a Bull Trap?

Bull traps can be misleading because they often get traders to buy long positions, only for the market to go down soon after. Even though bull traps can be hard to spot in real life, there are a few key things to look for that can help you stay away from them.

Most bull traps happen when prices start to go up in a downtrend or bear market. Buyers may see the rise as a sign that the downtrend may be coming to an end. A technical signal, like the price going above a level of resistance, could help to boost that confidence. These buyers could jump in, but if the downtrend keeps going, they would quickly be pushed out by sellers.

What happens during a Bull Trap? It indicates that the buyers have been in charge for an extremely extended period and are most likely on the verge of exhausting their resources. This presumption will be correct once the price reaches the zone of resistance we have identified.

When shorter candlesticks develop, the price action typically begins to slow down. We can attribute this event to a sizeable number of long traders (buyers) taking their profits at the level of resistance.

After this, there is a lull in trading activity on the market until further buyers enter and attempt to push the price beyond the zone of resistance. This causes something called a “breakout” to take place.

Unwitting buyers interpret this as further evidence of the upward trend, and as a result, they place additional buy trades.

However, given that the vast majority of buyers have used up their available resources, sellers have begun flooding the market with orders, given that they control strong resistance zones.

The astute purchasers who are aware of this phenomenon begin to close out their trades. When the sellers noticed a decrease in the volume of buyer transactions, they increased the number of sell trades they conducted.

The imbalance that arises as a direct result of fleeing buyers and the aggressive actions of sellers is what causes the tendency to shift toward favoring the sellers. As the trend continues to move in a downward direction, it eliminates the stop losses of the new purchasers, which gives the sellers an even greater advantage. 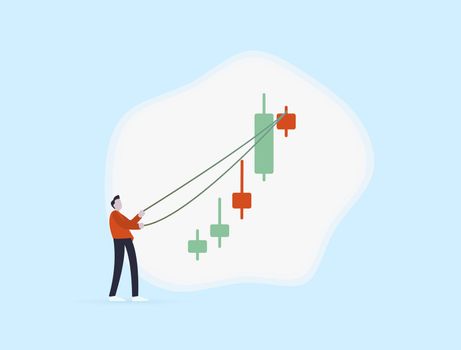 Example of a Bull Trap

The trader or investor may have avoided the bull trap by waiting for a breakthrough before buying or setting a stop-loss order immediately below the breakout level.

How to Identify a Bull Trap?

Testing the level of resistance more than once

A strong bullish trend maintained for an extended period but which reacts heavily to a particular resistance zone is the first indication that a bull trap may be on its way.

A robust advance with only minor interruption from bears indicates that buyers are committing all of their resources to the market. However, when they take the price to a specific resistance level, they tend to fear or respect it, and as a result, the price pulls back before continuing to go even higher.

However, as the price hit the amount of resistance indicated, it would begin to decelerate and go back a bit before continuing to rise. As can be seen below, there were three trials conducted before the actual bear trap was constructed.

As a result of this, one of the ways to recognize a possible bull trap is when the price makes big stops on a resistance level following an extended and steady upswing.

The last phase of the trap will typically be marked by the appearance of a massive bullish candle that eclipses the majority of the candlesticks located immediately to the left.

It’s possible that the following factors contributed to the creation of this candlestick:

A stock has set itself up for a bull trap if it experiences a gap-down or a dramatic decline followed by massive red candles, and then it slowly but steadily recovers after the drop.

Due to its inherent nature, the market has a typical propensity to behave in cyclical patterns. When a market hits the peak of a cycle, there is typically a period of consolidation during which bulls and bears struggle to control the market.

This lull in activity may be interpreted as an early warning sign that the market is getting ready to make a sharp turn for the worse.

A Range Is Formed

The formation of a range-like pattern on the resistance level is the final aspect that distinguishes a bull trap setup from other trading setups.

If a price is said to be trading in a range, it means that it looks to fluctuate back and forth between a support level and a resistance level. This range may not be ideal, particularly on the top side, because the market may still be making higher and smaller highs.

Role of psychology in Bull Traps

Buyers want to trade at the first sign of a price hike. This may make traders more susceptible to getting “stuck” because there is little evidence of a sustainable uptrend. They buy with some evidence – price above resistance – but primarily on hope as the breakout is false.

When there are no other customers, buyers’ psychology changes. Traders who just bought may panic and sell, driving down the price.

Price action reflects bullish and bearish behavior. Price activity may be the consequence of trades based on fear of missing out (FOMO), greed, anxiety, and other emotions.

Bull trap patterns are well-known for their ability to persuade traders to enter risky transactions that almost invariably turn out to be unsuccessful. As a result of this, numerous traders experience a chill whenever they hear the word spoken.

On the other hand, bull traps have the potential to become profitable setups if one knows how they form and what they signify. Through this article, we have come to know how to recognize bull traps and even trade in them in a manner that minimizes losses while boosting profits.

- Advertisement -
Previous article
Can Crypto Holders Recover Losses In Court?
Next article
What’s the story with WazirX? Does Binance own it?