Bitcoin vs Bitcoin Cash –6 Differences Between BTC and BCH

Concerns over Bitcoin’s capacity to efficiently scale have been raised ever since the cryptocurrency was first introduced. A digital record known as a blockchain is used to process transactions involving the digital currency Bitcoin.

These transactions are also validated and preserved within the blockchain. Blockchain is a game-changing new technology for digital ledger recording.

Because the truth of what has occurred is validated not by a single actor but by the consensus of all participants, this makes it significantly more difficult to manipulate ledgers.

In addition to this, the network is decentralised, meaning that it can be found on computers located all over the world.

The Bitcoin network experienced a hard fork, also known as a split, on the first of August in 2017. Because of the fork, there is now a story involving two competing cryptocurrencies: Bitcoin (BTC) and Bitcoin Cash (BCH), which is a split from the original Bitcoin.

Both of these cryptocurrencies are named Bitcoin.

Although Bitcoin Cash wasn’t the first cryptocurrency to split off from Bitcoin in this way, it was one of the most notable due to the speed with which it rose to become one of the leading cryptocurrencies in terms of market capitalization.

Market capitalization is done by multiplying the number of coins in circulation by the price of each coin. The fact that the two cryptocurrencies’ names are so similar, on the other hand, can make it challenging to differentiate between Bitcoin and Bitcoin Cash at first glance. 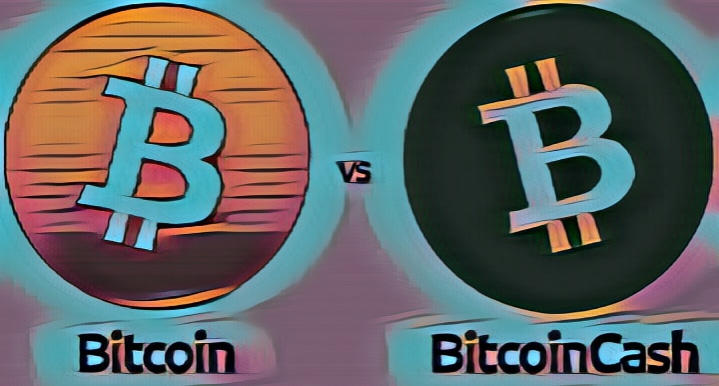 Before Bitcoin became popular, there weren’t many transactions to handle. With hundreds of thousands of daily transactions, speeds and costs can be slower. The network can’t handle high traffic and low costs. Scalability refers to making blockchain technology suitable for mass use.

Miners compete to solve equations and add blocks to the network. In exchange for validating new transactions and securing the network, they receive BTC or BCH.

BTC’s 1-megabyte block size limits the number of transactions in each block. High transaction volume might create a long “queue” of users waiting to get their transaction into a fresh block.

As a user, you can either wait for your transaction to go through or pay a hefty price so miners prioritise it. Some Bitcoin community members grew fed up with years of scalability discussions.

The BCH team extended the block size from 1 to 8 megabytes on August 1, 2017. This separated Bitcoin’s blockchain and created Bitcoin Cash. This update allows more transactions per block, but at a cost.

This can lead to the increasing centralization of nodes, which can undermine Bitcoin’s security if a few powerful people choose to compromise it.

The BTC camp (“small blockers”) wants to keep blocks short and scale through “layer 2” or off-blockchain solutions like Lightning Network.

BCH blocks can fit more transactions, hence transactions are more likely to fit without waiting. BCH isn’t used as much as BTC, hence its network traffic hasn’t been tested as much. BCH’s block height is higher than BTC’s, indicating it mines and confirms transactions faster.

From March 2009 to December 2019, the S&P 500 and Dow Jones Industrial Average have gained 369 and 326 per cent, respectively. These gains aren’t funny. Bitcoin helped make crypto the best-performing asset class of the 2010s.

BTC is the clear winner when it comes to hash rate, also known as “mining power,” when comparing the Bitcoin network to the Bitcoin Cash network.

The total hash rate of Bitcoin Cash is a fraction of what it is for Bitcoin. This hash rate shows the amount of computer power that miners are utilising to validate transactions and safeguard the network.

This makes Bitcoin Cash more susceptible to what is known as a “51% attack,” which occurs when a malicious actor or group gains 51% of the network’s hash rate or more.

This gives the attackers the ability to engage in activities such as reversing transactions or other activities that are detrimental to the network.

To issue tokens on the Bitcoin blockchain, projects must use Omni, a platform for producing and trading digital assets and currencies. Omni transactions include “next-generation functionality” but are largely used with stablecoins.

Bitcoin Cash’s Simple Ledger Protocol (SLP). The protocol lets developers produce tokens on BCH, similar to Ethereum. Some assets are both Omni and SLP tokens. Existing on many blockchains helps people choose a network. Both solutions have been adopted slowly.

The SLP protocol allows nonfungible tokens (NFTs). Compared to Ethereum or other blockchains, their utilisation on BCH is limited.

BCH may face the same scalability issues as BTC and hefty transaction fees if it gets more popular. BCH may have similar or better adoption than BTC. If BCH’s price climbs with its popularity, miners may switch to it.

So far, there’s no clear winner. Bitcoin might be “digital gold” or a store of value in the near future, whereas Bitcoin Cash could be a convenient payment option.

- Advertisement -
Previous article
According to our sources, the Leading Indian cryptocurrency exchange WazirX has laid off roughly 40% of its staff.
Next article
Facebook, Instagram Users in the US Can Now Share NFTs