What Is Play-To-Earn And How To Cash Out

Play-to-earn games have risen a lot in popularity, especially this year 2022. And, with the fame of cryptocurrencies and blockchain technology, it was expected that everyone would talk about it.

Play-to-earn games are a type of online games that give users rewards for completing certain tasks. These rewards could be cryptocurrencies or NFTs from the game itself. The foundation of the play-to-earn gaming economy is based on blockchain technology.

We will now show you more about play-to-earn games, but first, it is essential to understand blockchain technology.

Blockchain is a technology-based on a chain of decentralized and public operations blocks. This technology generates a shared database to which its participants have access, who can track each transaction they have made.

It is like a large, unchangeable, and shared ledger that is written by a large number of computers simultaneously.

Every time a member of the network performs a digital transaction, said transaction generates associated data that will be stored in one of the blocks. When that block is full of information, the block is coupled to the already existing blockchain.

The information that is stored on the said network will depend on the purpose for which it was created.

It can be a network that stores payment data (cryptographic currency or cryptocurrencies), medical information, logistics or food traceability data, and even electoral data count.

In the case of play-to-earn games, the blockchain is used to create items that no one else can steal or duplicate, creating an economy around it.

The distinction between a blockchain and a centralized network (a regular server that stores data) is that the blockchain network is spread globally and not in a single location.

As a result, the blockchain network offers a number of benefits, including anonymity, decentralization (i.e., not relying on a centralized executor), and security.

When a new user enters a play-to-earn game, it is as if they are creating one of these nodes. The blockchain network will create this server data protection system, creating a secure economic network.

As we explained before, the blockchain is used in play-to-earn games for various aspects. Some games only use blockchain technology for their assets. And some games run their entire world on the blockchain. 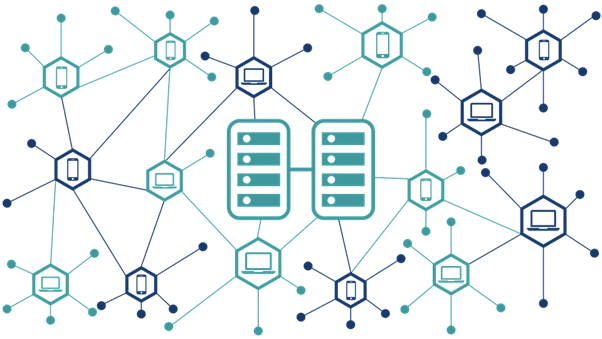 When a game uses blockchain technology for its assets, it means that users can generate assets in the blockchain economy. This means that if a user finds or spawns an item, it will automatically be added to the player’s wallet.

When this item is added to the wallet, it is not converted to the in-game cryptocurrency, but remains as an item. This will allow users to collect high-value items, and trade these items with other users. These trades would be done on the game’s blockchain.

This type of games could be run on a centralized server. And the decentralized blockchain technology would only take care of the in-game economy.

All games that are play-to-earn, and use cryptocurrencies as assets, use this methodology.

Unlike the previous one, which could be based on a centralized server, this type of game is based on the decentralized network of the blockchain. This means that there is total decentralized governance.

This means that all users are the node of the blockchain network, and they are the ones that verify every action that other users do in the game. This is partly risky for creators because they lose more control. But it is beneficial for players as the risk of cheating is nil.

Some of these games can be run on existing blockchains. But, there are also play-to-earn games that create their own blockchain networks, which are used only by the users of that game.

There are already a variety of types of play-to-earn games out there right now: fighting, strategy, role-playing, and item trading.

An example is Alien Worlds, in which the user is a space explorer who must choose planets to mine; Based on your choices, you gain items and skills.

Another example is Splinterlands, which follows the typical collectible card-based gameplay and has become very popular recently.

Each of the cards represents power or ability; the player has to build a balanced deck and use it wisely in battles to earn rewards.

The rewards that could be obtained in traditional video games, such as weapons or spells, now have a representation through a ‘token’, which is an NFT.

These NFTs are unique digital objects that have value and can be exchanged for real money. Armor can be represented by an NFT. And you could take it out of the video game environment and trade with it.

Starting to play is not always within everyone’s reach. To compete in Axie Infinity you need to spend at least $700 to buy a full team of creatures, called ‘axies’.

The reward for winning a fight can be around the equivalent of about 60 cents. At these prices, on average a beginner with basic axies could earn between 5 and 15 dollars a day.

This video game, born in 2018, generates sales of 84.9 million dollars per month, with 350 thousand active users per day.

How to cash out from play-to-earn games?

We have already explained how the economy of these games works, through the purchases and sales of NFTs from the game itself. But there also has to be a way to collect the money you’ve already generated by playing.

Depending on the game, there are a few different ways to cash it out. You have the option of receiving your rewards in the form of cryptocurrencies or selling your earned NFTs for cash.

If you want to cash out your rewards directly in the form of cryptocurrencies, here’s how to do it:

Another way to collect money is through the game’s own NFT.

As we already mentioned, the items obtained in the game will go directly to the wallet that the user connected or created to his account. And these are considered as NFTs of the game.

Well, one way to charge for these items is to sell them in the form of NFTs. Here we will show you how to do it:

- Advertisement -
Previous article
How Does GameFi Work?
Next article
What Is Harmony Blockchain?