What Are Altcoins And Why Should You Know About Them?

The world of cryptocurrency and crypto-based projects appear to be in constant transformation. Ideas become trends, and a few of them become new methods.

Many are stillborn techniques that never gain the momentum they require to take off. Similarly, buzzwords linked with bitcoins and altcoins are largely getting lost in the crypto dictionary.

Bitcoin is the first-ever coin designed to be a cryptocurrency. It is called the Mother of Cryptocurrencies, and the coins and tokens that emerged in the years after are known as altcoins [alternative coins].

Altcoins and tokens are cryptocurrency terms that emerged after the development of bitcoin in 2009.

After Bitcoin, ‘Namecoin’ was the first-ever altcoin to be created, back in April 2011. Back then, Namecoin has been the only substitute for bitcoin.

Let’s dig a bit deeper into altcoins and tokens.

Several coins have already been introduced as bitcoin alternatives with the goal of improving security and privacy. The most popular altcoin of today is Ethereum which was released in July 2015.

Altcoins, like bitcoin, are based on blockchain technology. A blockchain is a distributed, decentralised, and digital ledger that serves as a secure database.

The data saved here is impossible to tamper with. Each altcoin is distinct and outperforms its counterpart in terms of transaction speed, processing fee, and mining cost.

Ethereum, Litecoin, Ripple, and many other altcoins are good examples; these coins have mildly distinct characteristics from bitcoin.

The functions and mechanisms of altcoins are grouped into categories. Here’s a rundown of a few of the most important:

Based on mining Altcoins are divided into two categories

Stablecoins are, as their name suggests, stable. These coins are intended to reduce price volatility by tying their worth to a basket of goods such as fiat currency, precious metals, or other cryptocurrencies.

Security tokens, like traditional equities, often provide holders with equity in form of ownership or just a dividend distribution. The said type of ownership encourages investors to invest their funds.

Some altcoins are only created for rewarding the ecosystem’s members. Utility tokens are utilized to pay network costs, buy services, etc. Binance coin, CRO, TWT, and BAT are some examples of such utility tokens.

Meme coins are based on a joke or a clever parody of well-known cryptocurrencies. They usually gain popularity quickly, thanks to well-known crypto influencers. After the release of the Shiba Inu dog-themed Dogecoin, thousands of other meme coins have been created.

What Is The Purpose Of An Alternative Coin?

Altcoins work in the same way that Bitcoin does. A block is created whenever a transaction request is made on the blockchain.

A technique named mining is used to process the transaction block.

A large percentage of mining-based cryptocurrencies use Proof-of-Work (PoW) to connect to the blockchain network.

The block is sent across multiple nodes for security verification (miners). Miners must solve complex mathematical calculations in order to verify the block.

As “evidence” of the Proof-of-Work completed, miners are paid in cryptocurrencies such as eth, sol, and others. The transaction is completed while the authorized block is being transmitted to complete the blockchain.

Mining has the goal of slowing down coin generation and ensuring that each transaction request is processed safely and correctly.

It’s worth noting that a private key is used to transfer funds from one digital wallet to another, and a blockchain serves as a record of the transaction that can’t be altered. 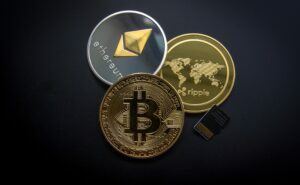 Difference Between Bitcoin And Altcoin?

Despite the fact that they’re really similar and perform on the same principles, Bitcoin and altcoins differ in a number of ways.

The production of a Bitcoin coin takes ten minutes. Altcoins like Litecoin, on the other hand, can generate coins every 2.5 minutes.

Because proof-of-work, the method for creating crypto blocks, is extremely energy-intensive, intensive, and limiting, implementing and using Bitcoin is difficult.

Some Altcoins, on the other hand, have gone above and beyond. Instead, they use the proof-of-stake system to gain a competitive advantage, which conserves energy and reduces transaction validation time.

Altcoins are modified bitcoin versions. Typically, the coins are formulated to overcome issues with the bitcoin architecture, such as mining costs, speed, and other factors.

Altcoins were formed to capitalise on Bitcoin’s success by changing the rules to appeal to a broader range of users. Ethereum, for example, the second-largest cryptocurrency by market cap, was the first to introduce the concept of “smart contracts.”

Smart contracts are basically computer programs that only run when certain terms are fulfilled. They use blockchain technology to carry out contracts between two parties, allowing new crypto applications to be developed.

Governance, smart contracts, and interoperability are all unique features of altcoins.

Here are a few of the most prominent Altcoins with fast transactions, high liquidity, high security, and low mining hardware.

Why And How Were Altcoins Created?

People began looking for alternatives to Bitcoin because of its skyrocketing price and long processing time. One of its reasons could have been that bitcoin’s circulation is limited to 21 million.

Numerous coins were soon introduced as bitcoin alternatives, with the objective of improving security and privacy.

Namecoin was the first altcoin, launched in 2011 as a bitcoin alternative.

Most altcoins are designed to compete with bitcoin, claiming to offer better privacy, decentralisation, or a concentration on something bitcoin cannot.

Currently, there are nearly 10,000 altcoins. Due to the fairness of the process, creating a coin is quite simple, and anyone can do it.

Altcoins are cheaper than Bitcoin, and they may show up more appealing because they “have far more room to grow.

A lot to consider on before purchasing an altcoin :

Everyone who wants to invest in altcoins should start here. Take your time and learn everything there is to know about the cryptocurrency you’re considering.

Each currency you plan to purchase should have a track record. One of the reasons Ethereum is trusted is because of the reputation it has earned over time based on its history. History has always instilled in us a sense of reliability.

Also please remember that, to a certain extent, altcoins offer little or no assurance. Plenty of of them may appear today and then vanish tomorrow. There are over a thousand cryptocurrencies competing for your attention right now.

Prior to actually purchasing any altcoin, you must have complete faith in your ability to meet the challenges ahead.

This is a question you must ask yourself as a potential investor. So, what exactly are your plans? Are you looking for a quick way to become wealthy, or are you planning a long-term strategy?

If you belong to the first group, you should consider other options for investing your money. Since most cryptocurrencies take a long time to gain traction before a pump, this is the case.

Are Altcoins Worth Investing In?

Alternative cryptocurrencies to Bitcoin are known as altcoins. Because not everyone can afford to purchase BTC.

A well-diversified portfolio always wins in cryptocurrency trading, just like it does in stock trading. That means that even if Bitcoin has a setback, the risks and rewards can be offset by others.

Altcoins are catching up to the most recent market activity. Nonetheless, Altcoins give you the opportunity to be a part of this movement, which focuses on improving the sport as a whole rather than just betting on the perfect horse.

Altcoins are wise investments because their potential returns are greater than regular equities and bonds. Moreover, as with any investment, you must fully comprehend all aspects of your investment before making a decision on whether or not it is suitable for you.

If you decide that investing in altcoins is right for you, make sure you research everything you’re going to invest in.

If you haven’t heard about the alt season, I will inform you!

What Is Altcoin Season?

Altcoin season, also known as Alt season, is a cryptocurrency market cycle in which the value of altcoins rises rapidly. This value shift can happen with or without the dollar value of Bitcoin.

Altcoins’ price success commonly surpasses that of Bitcoin during this market period. Altcoin prices are typically either stable or move slowly. However, the value of all altcoins may occasionally skyrocket in a matter of seconds.

However, even if it is riskier, investing in altcoins could be beneficial. Before investing in any cryptocurrency, however, make sure you understand everything there is to know about it and consider it as a serious investment.

Also Read: What Is ApeCoin And How Does It Work?