The Terra Luna Ecosystem and UST in Context

UST is the Terra ecosystem’s algorithmic stablecoin, and as such, it is involved in maintaining a $1 to $1 peg through its mint and redemption mechanisms.

The UST stablecoin and the native token LUNA are the two main components of the ecosystem. To mint UST, a person must just burn an equal number of LUNA. The user, on the other hand, can redeem their UST by trading $1 of LUNA.

LUNA and DAI Have Significant Differences.

The UST peg was being tested for the first time at this point. In the 3-Curve pool, $85 million flew from UST to USDC. Curve pools are a type of DeFi exchange that is used to keep the peg stability of assets like stablecoins.

As slight fluctuations on stablecoins don’t really make headlines, users are in different parts of the world, and maybe continuing to work their normal jobs, retail investors would not have known at this point.

Funds with a big stake in the ecosystem, on the other hand, would pay special attention. As previously stated, when one big entity begins to sell, it creates a negative feedback loop of panic selling among the ecosystem’s other holders.

LFG (Luna Foundation Guard) publicly stated on May 8, 2022, that it would utilise $1.5 billion of its reserves (50 percent of BTC to market makers, 50 percent of UST to buyback BTC upon stability)

The Anchor Protocol reports $2.9 billion in outflows and a 20% drop in deposits during this time.

Day 1: The selling pressure has begun, and it is clear that many holders are selling and heading for the exits.

The de-pegging process continued, with the prices falling to $0.60 at one point. Remember that the stablecoin’s goal is to keep its value at $1.

If you glance at the market capitalizations, you’ll discover that LUNA was around $25 billion at the time, while UST was around $19 billion. This meant that not all holders of USTs would’ve been able to exit.

The system’s confidence had been shaken, and the price of LUNA continued to plummet at an alarming rate.

After day two, LUNA fell 48 percent from $60 to $31, with much more selling taking place and UST holders escaping. 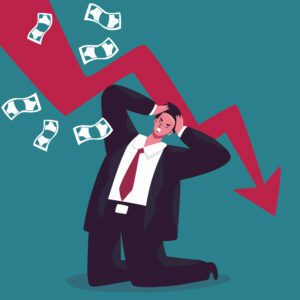 As said earlier, the ecosystem is largely based on faith. Although the peg was recovered to above $0.90 after the confidence was shaken, the ecosystem had been damaged.

The UST continued to de-peg to $0.2 over the course of the day and is now worth a few cents. With all liquidity dried up, the Anchor protocol and curve pools were no longer able to rescue them.

As an outcome, the one and the only way for people to prevent losing everything was to use the ecosystem’s mint-redemption mechanism, which meant selling their UST.

As a result, the LUNA token experienced hyperinflation, with the price dropping 99 percent from $31 to $0.01.

More than $41 billion in market capitalization was lost in just three days. Although the crypto industry has seen the death of prior stablecoins, the speed with which the ecosystem vanished was unexpected.

Reminder: All cryptocurrency is risky, so do your homework before actually investing in these projects. Make wise decisions, because we’re all in this for the long term.

Mufasa
Mufasa is the lead writer at CryptoMufasa who likes to share all the latest info on the crypto world with you! Mufasa Enjoys enjoys a good read and recommendations so don't forget to comment on the posts and let him know.
Previous articleWhat Is A Crypto Dusting Attack And How Do I Avoid It?
Next articleWhat Are Altcoins And Why Should You Know About Them?

Hot Wheels is a car brand based in America. The brand models cars that Mattel the American toy maker introduced in 1968. Up until...

Cryptocurrencies have gone mainstream in recent years, with new coins and tokens appearing on a regular basis. Some of these coins are clones of...

Since the debut of GameFi and its tremendous impact on the gaming business, we have seen an influx of new users. However, many others...