Crypto Bubbles: Is Bitcoin A Bubble?

Bitcoin has seen ups and down on the price chart in its over ten years of operation, drawing the attention of financial professionals and pseudo-economic scholars. With constant profanities regarding Bitcoin and cryptocurrency from adherent financial authors and billionaires like Nassim Taleb, Charlie Munger, Ken Griffin, and even Warren Buffet, one must begin to reconsider what this new digital asset truly is – a facade or a genuine deal?

Bitcoin has outperformed stocks in past years, with returns of over x196, which is one of the major contributing factors to the recent rise in the number of billionaires throughout the world. However, because riches may be lost as readily as it is earned, it appears to attract foes.

In economic terms, a bubble is a series of financial events defined by a quick spike in the asset’s valuation, which will almost always be followed by a rapid decline, resulting in the asset’s demise. To be termed a bubble, the price of an asset must rise much above its actual value; this rising momentum will accidentally influence an investor’s behavior to alter, causing them to sell.

Is Bitcoin a real bubble?

An asset is considered a bubble when It can’t be exchanged easily for services or products although it has value in the market.

BTC has value in the market as companies accepting BTC are growing day by day. Microsoft, Visa and Google, and even brand names like Gucci, AT&T, Starbucks, and many others accept crypto as payments.

Some nations such as El Salvador and the Central African Republic have made bitcoin legal tender which is accepted along with fiat currency for every available commodity and service. Bitcoin can be exchanged very easily.

A bubble asset cannot be used to offset loss during a financial crisis; nevertheless, this is false because cryptocurrency can and has always been used to alleviate the loss. As a symbol of a flat currency, stablecoins, a type of cryptocurrency with little to no fluctuation, have been adopted by traders and investors numerous times to prevent loss.

A bubble causes investors to lose their invested funds. But in Bitcoin’s case, investors have made a lot as buying and selling options during price fluctuations of BTC have proven greatly fruitful.

To be considered a bubble, an asset must have almost no adoption, which is not the case with Bitcoin, which has millions of users all over the world. The present cryptocurrency industry is worth more than $2 trillion, with more than 20 million active users using it for daily transactions. 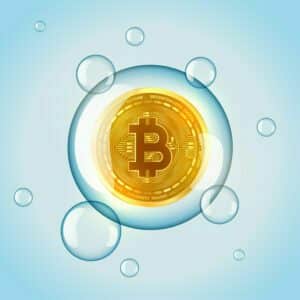 It’s critical to be aware of the likelihood of a crypto bubble if you’re a newbie crypto trader. As a result, one thing to bear in mind while crypto trading is that volatility is likely to continue. Considering cryptocurrency is so volatile, even a mere tweet can alter the dynamics of the entire Bitcoin market. As a result, many experts advise only investing 5% or less of your whole portfolio in cryptocurrencies.

Also, because prices can change quickly, don’t be intimidated by a sudden price drop. If you truly believe in digital currency’s potential, you should concentrate on your long-term aim.

But significantly, don’t consider purchasing cryptocurrency only because the price is going up and everyone else is. If you allow your emotions to rule you too much, you risk selling at the wrong time or making a poor decision.

Finally, being current with the news can help you better comprehend the market and make better forecasts about what will happen in the future.

- Advertisement -
Previous article
What Is A Crypto Wallet And How Is It Classified?
Next article
Google is to provide blockchain developers services.