A hacker stole $100–110 million worth of cryptocurrency from a blockchain connected to Binance.

The world’s largest cryptocurrency exchange’s blockchain, Binance Smart Chain, put the brakes on operations on Thursday following a “potential exploit” that on-chain data revealed might have targeted hundreds of millions of dollars in cryptocurrency.

BNB Chain tweeted from its Twitter account, “Due to abnormal activity we’re temporarily halting BSC,” later stating that the activity constituted a “possible exploit,” which it described as contained.

An exploit on a cross-chain bridge, BSC Token Hub, resulted in extra BNB. We have asked all validators to temporarily suspend BSC. The issue is contained now. Your funds are safe. We apologize for the inconvenience and will provide further updates accordingly.

Initial token movements suggested that an attacker targeted up to two million BSC tokens late on Thursday, although actual losses may be substantially lower. BNB Chain stated via a tweet that assets worth between $100 million and $110 million were taken off-chain but stated in a tweet that $7 million was already frozen.

The fact that such a tiny amount of assets were definitely taken underlines the benefit of BNB’s decision to break the chain rather than risk having more assets escape. Blockchains are supposedly decentralised systems designed to function independently of the whim of individuals; you can’t just turn them off.

BSC acknowledged that it coordinated a chain shutdown after identifying problems with the BSC Token Hub protocol, which serves as a clearinghouse for crypto transactions travelling between the interconnected components of the Binance-linked blockchain. It acknowledged the quickness of the validators.

One tweet said, “We are humbled by the community’s quick response and collaboration to block funds.

BSC’s native BNB token, which was shaken by the threat of an assault, dropped to $280.40 from $293.10 following a sleepy day of trade, according to CoinMarketCap, which Binance owns. 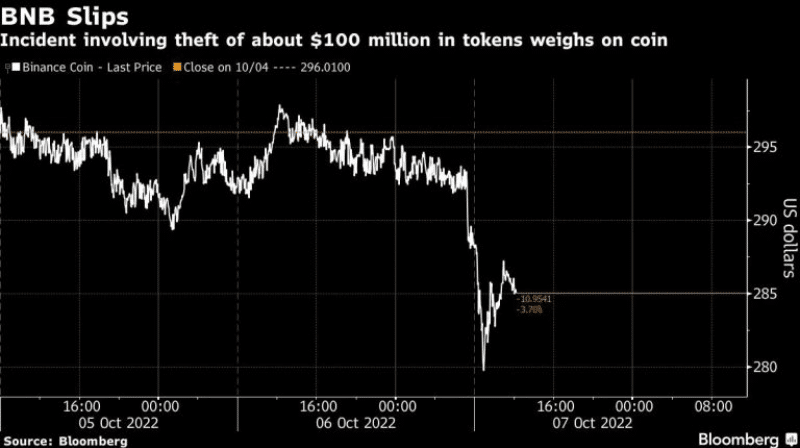 On-chain data reveals that an attacker who stole cryptocurrency using cross-chain swaps, bridges and borrows made two large withdrawals of 1 million BSC tokens from the BSC token hub this afternoon.

However, BNB’s Twitter stated that it will “help freeze any transfers” and assured users that “all funds are safe.”

The major stablecoin supplier, Tether, has blacklisted the offending address, according to Twitter sleuths, indicating that the company believes the movement of tokens was caused by an attack rather than anything more innocuous.

It appears that 2 million BNB was hacked.

Tether was blacklisted which seems to confirm it. $BNB price taking a hit as a result. https://t.co/DkOtsJ6pjT

- Advertisement -
Previous article
Breaking: OKX crypto exchange is blocked by Russia
Next article
Income Tax: How you can reduce 30% rate on Cryptocurrencies?