471 ETH Raised By PoolTogether Through NFTs to Fund Legal Defence

PoolTarget has gone beyond more than half in its fundraising, and it still has extra 2 days to keep raising funds till the fund-raising NFT campaign comes to an end.

PoolTogether is a “no-lose lottery” Defi (Decentralized Finance) platform, and it has raised over 470.90 Eth by selling NFTs (Non-Fungible Tokens). PoolTogether wants to use the funds to sponsor its defense against a lawsuit action, a putative one.

PoolTarget’s fundraising goal is a minimum of 769 ETH, which is almost $1.5 million during the time of this article writing. With what PoolTarget has raised, they have gone above half in the fundraising.

It intends to fight this lawsuit it calls ‘no merit suit’ with the $1.5 million that it will raise through the NFT sales fundraising.

“PoolTogether Inc. is a defendant in a putative class action lawsuit. A person deposited the equivalent value of $12.00 into the protocol and is now suing PoolTogether Inc. and others for substantial damages.”

The personality spearheading the lawsuit is Joseph Ken. Joseph Ken was the ex-lead of technology for Senator Elizabeth Warren’s campaign for the presidency in  2020.

Joseph Ken deposits stablecoins worth $12 into the PoolTogether protocol and then filed a lawsuit against the project.

According to a complaint that Joseph Ken amended in February, Ken claimed that Pooltogether is running a lottery in New York that is not legal.

He said that the platform may end up not giving any positive value because they keep up to 50% of every prize weekly in their reserves.

On the other hand, PoolTogether claims that it is a platform that gives lotteries that are free from risks when people deposit stablecoins into the protocols.

To generate the lottery ticket using a stablecoin deposit, the system will use the capital of the ticket buyer and that of the providers’ liquidity.

Anyone who wins the lottery will get the larger yield share, and the winners that come behind will get smaller shares of the yields. Every other participant will get a 100% refund of the stablecoin deposit that they invested into PoolTogether.

From details on PoolTogether’s website, they offer up to $80000 worth of prizes every week across pools v3 and v4.

In responding to Joseph Ken’s Lawsuit, PoolTogether said that the allegation is not based on merit, although it will defend the suit.

Furthermore, PoolTogether dragged people’s attention to an article in January mentioning that the lawsuit looks like a deliberate effort to test the central doctrines of the Decentralized Finance community. 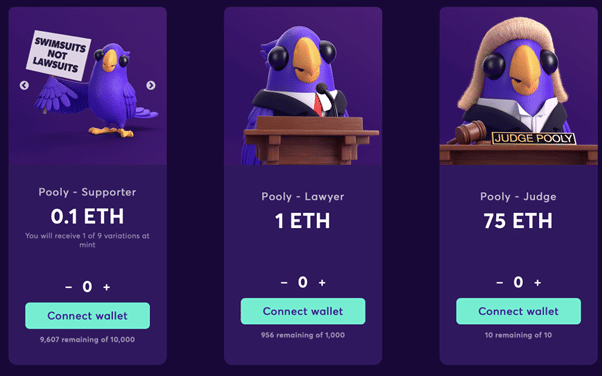 This support has helped PoolTogether sell up to 2,416 NFTs at this time of writing. The total price of this number of NFTs is 470.90 ETHs, the current worth in dollars is $911,959.

The NFTs on the PoolTogether platform shows an animated avatar with a purple color. The name of the NFTs according to PoolTogether is Pooly, and all the collections come in three categories of pricing and rarity.

Major players in the NFT community have been showing major support by buying up the NFT collections as fast as possible. For example, Andreessen’s general partner Chris Dixon bought the judge tier NFT for 75 ETH.

Other community members have bought other tiers as their support to the Decentralized Finance community.

More importantly, Joseph Ken also expresses his hate for the entire cryptocurrency community. It may not be far-fetched from the reason a lot of community players are backing PoolTogether strongly.

In Joseph Ken’s opinion, the cryptocurrency ecosystem is a fast-changing climatic change that is taking place.

He is very interested in how this sudden climate change is giving people room to dodge financial regulations set by the governments and also scamming gullible consumers.

The crypto and the Decentralized Finance community is still gaining the traction that it needs, not fully regulated. A lot of governments are still trying to accept the cryptocurrency community, and a lot of players are getting sanctions from time to time from the governments.

If you look at the state of decentralized finance and the entire crypto community, it is still facing opposition here and there.

Joseph Ken’s lawsuit might be an end to the reign and growth of Decentralized Finance and the entire crypto community if PoolTogether flops in its defense.

To keep defending the integrity of the community, they will have to raise enough money to defend themselves.

If they win the defense, it will be written in the history of the crypto ecosystem that once upon a time, the destiny of the entire community rested on PoolTogether and they saved the day. They will etch their name as the superheroes of the entire crypto community.