Elon Musk SpaceX to Accept Dogecoin as Payment for Some Merchandise

In 2021, Elon Musk (The  Billionaire CEO of Tesla and SpaceX) made open to the crypto community his love for the meme coin, Dogecoin. In the past year, Dogecoin was almost leaving the crypto scene, seen as a joke to a lot of crypto traders and investors.

However, Elon brought Dogecoin back into the crypto limelight by ramping up his support for the meme coin.

After Elon Musk showed his love for Dogecoin, the meme coin’s price pumped. A major factor that affected the price pump was Elon Musk mentioning that Tesla and SpaceX will accept dogecoin as payment.

Elon vowed to ‘literally’ take a dogecoin to the moon. To Elon, it was a great idea he called a dogecoin heated hot tub.

When Elon Musk took interest in Dogecoin as payment for Tesla and SpaceX, fans of Tesla made an amazing suggestion to Elon. They asked Elon to allow Tesla cars to mine dogecoin tokens while charging.

Amid this suggestion by Tesla Fans, a competition of Tesla decided to act on the suggestion. The electric car company announced to the public that they are working on a brand of electric cars that will mine this meme coin and other cryptocurrencies as well.

Other Electric Cars Will Mine Dogecoin

In June 2021, an electric car company (Daymak) based in Toronto, Canada revealed to electric car lovers and the crypto community its intentions.

Daymak told the general public of its intention to build a 3-wheeler electric car in the future that will mine cryptocurrencies like Ethereum, Dogecoin, and Bitcoin while it is charging.

Daymak announced that it will launch these 3-wheeled cars in 2023. However, it started accepting pre-order cryptocurrency payments for the electric car.

The name of the car will be Spiritus. Aldo Baiocchi claimed that Spiritus has received “several pre-orders via bitcoin since the announcement.”

The pre-order payments raked in over $400 million worth of cryptocurrencies from preorder payments.” We feel crypto is the future,” says Baiocchi.

Aldo Baiocchi stated the following in a press release on Spiritus: “The Nebula Miner will generate income while your Spiritus is parked, unlike most vehicles which lose value while they are sitting in your garage.

By the time Spiritus is released in 2023, we will already be in the midst of the blockchain revolution, according to the current cryptocurrency movement.” In 2021, Bitcoin and other cryptocurrencies soared in prices and came into the spotlight.

Most blockchain enthusiasts and investors started calling cryptocurrencies and blockchain technology ‘the future and backbone of software and finance.’ The reason was because of the massive bull run that the cryptocurrency industry witnessed, even meme tokens like the dogecoin soared in price.

The chart below shows the price of dogecoin between January and March 2021. 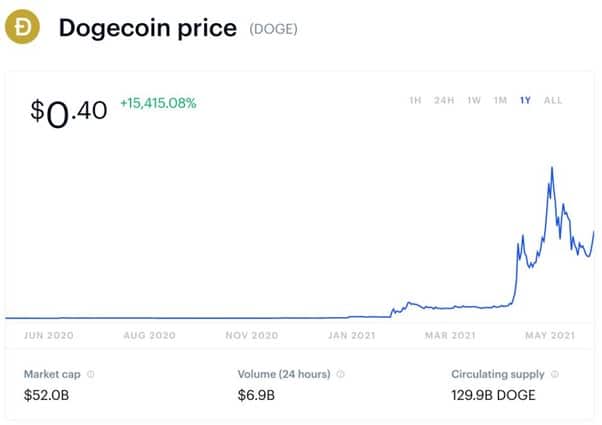 Aldo Baiocchi added, “Dogecoin is the crypto of the people like Musk says,”. “[Musk’s] going to mars, he can figure [dogecoin] out.”

In 2021, Elon Musk put an end to the cryptocurrency party. He placed a $150 million bitcoin bet, and this action gave the price of bitcoin a pump in February. In Addition, Elon Musk permitted Tesla lovers and clients to buy Tesla products using Bitcoin.

However, he reversed this decision because of the serious criticism he faced about the huge carbon footprint associated with bitcoin.

Meanwhile, Elon Musk gave very significant support to Dogecoin (a meme coin created out of a joke). Since the creation of Dogecoin, it has stayed without developments and users till 2021.

Elon called on the team developers to bring on their ideas for upgrading and improving the meme coin. He wanted to help Dogecoin get on the list of the five top cryptocurrencies in the ecosystem.

A lot of fans supported Elon’s move and traders stocked up on Dogecoin hoping that the price will keep soaring because of Musk’s influence. However, Elon Musk mentioned that no tweet or statements made about Dogecoin should be taken seriously.

In response to the “a hot tub that’s heated by mining dogecoin” a “great idea.” a statement by Elon Musk, David Gokhshtein, a cryptocurrency investor said, “You should have doge mode in your Teslas.”

Two other Twitter users added, “Imagine the superchargers full of Teslas with free supercharger mining doge 24/7.” “Musk should make the Tesla mine doge while you drive.”

On the 21st of June 2022, Dogecoin witnessed a 1% price increase. The price was around $0.068. Again just like the June 2021 announcement of Tesla accepting Dogecoin, Elon reminded the crypto community about his support for the meme coin.

At this time, Dogecoin was down by 90% after hitting an all-time high between May and June 2021.

On Tuesday, Elon Musk announced that just like Tesla in 2021, SpaceX will accept dogecoin as payment for some products. Tesla made this move too in January 2022.

Musk was speaking with the Chief Editor of Bloomberg at the Economic Forum in Qatar when he said, “I just know a lot of people who are not that wealthy who, you know, have encouraged me to buy and support Dogecoin.”

“I’m responding to those people and just people that, when I’ve walked around the factory at SpaceX or Tesla, they’ve asked me to support Dogecoin, so I’m doing so.”

Therefore, he bought more dogecoin to show his support for the cryptocurrency once again. In addition, Elon Musk said, “Tesla accepts Dogecoin for some merchandise and SpaceX will do the same.”

This year has been a bloodbath in the cryptocurrency ecosystem. The market is in its bear season. Bitcoin on the 18th of June 2022 fell to $17,601. 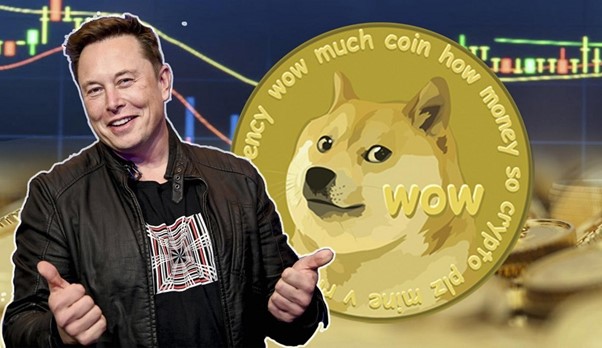 Elon Musk continued in his statement at the Bloomberg interview,  “I have never said that people should invest in crypto, in the case of Tesla, SpaceX, myself — you know, SpaceX and Tesla, for example, all did buy some Bitcoin, but the amount represents a relatively small portion of our total cash and near-cash assets..So, you know, not all that significant.”

On Sunday 19th of June, 2022, Musk tweeted, “I will keep supporting Dogecoin.” Another Twitter user commented, “keep buying it then,” Musk replied to the tweet with, “I am.”

The previous day, Billy Markus, the co-creator of dogecoin mentioned on Twitter that he hopes that people will use the meme coin “for something,” Elon’s reply to the tweet was, “Tesla and SpaceX merch, maybe more down the road.”

The previous week, an investor of dogecoin filed a case against Elon SpaceX and Tesla for $258 billion. The Dogecoin investor accused Elon and his companies of a pyramid scheme operation. He said they are doing this scheme to inflate Dogecoin’s price.

Could this be a pyramid scheme? Maybe or maybe not. Investors should look out for Dogecoin in the next bull run, we might just have a repetition of the price surge of 2021 following Elon’s announcement. The bull run is close, and Dogecoin may be one of those currencies that will make many people rich in that season.