Bitcoin ATM: How to use them?

To use a Bitcoin teller machine, you must have a crypto wallet and an accessible Bitcoin ATM.

What is required to use a Bitcoin ATM?

Here are a few things you need to set up before you use a Bitcoin ATM:

You’ll need a wallet that supports Bitcoin (BTC) and allows you to send and receive Bitcoin in this scenario. Finding a good one will not be difficult, considering Bitcoin is by far the most popular cryptocurrency. There are numerous varieties of wallets, each with its own set of benefits and drawbacks.

A Nearby Bitcoin ATM

You will need to find a Bitcoin ATM once you have a wallet, and these are usually located in areas that receive a large amount of traffic, such as shopping malls or airports. These ATMs look like traditional ATMs but allow you to deposit and withdraw cash in exchange for Bitcoins.

To find the Bitcoin ATM closest to you, you’ll need to use a live map like Bitcoin ATM Map or Coin ATM Radar. These maps allow you to customize your search by operator fees, machine type and supported cryptocurrency in addition to location.

Once you find a Bitcoin ATM near you, note down the address or mark the location on your GPS so you can locate it easily.

A Guide to Buying Bitcoin at a Bitcoin ATM

Here’s what you need to do once you find a Bitcoin ATM:

Most Bitcoin ATMs will require you to create an account with the ATM operator before you can use the machine.

As a first step, you have to create an account with the ATM operator. The account-creating process is quite simple, this is usually done by scanning your ID or driving license.

Step 2: Fill out your wallet information

At the ATM, you’ll be requested to enter your wallet information using a QR code or an alphanumeric key. Using your mobile phone, scan the QR code on your Bitcoin wallet. If you don’t have a Bitcoin wallet, you can print a paper wallet at the kiosk and then use it to import your Bitcoin into a wallet later.

After adding your wallet information, you can insert the cash you wish to convert into Bitcoin. You can see on the screen the amount of money you deposited and the amount of Bitcoin you’ll receive in return. Your Bitcoin wallet’s address and the amount to be sent will also be displayed.

Then you’re done! Congratulations! You have successfully purchased Bitcoin via a Bitcoin ATM.

It is important to remember that not all Bitcoin ATMs are the same, so the steps may be slightly different. 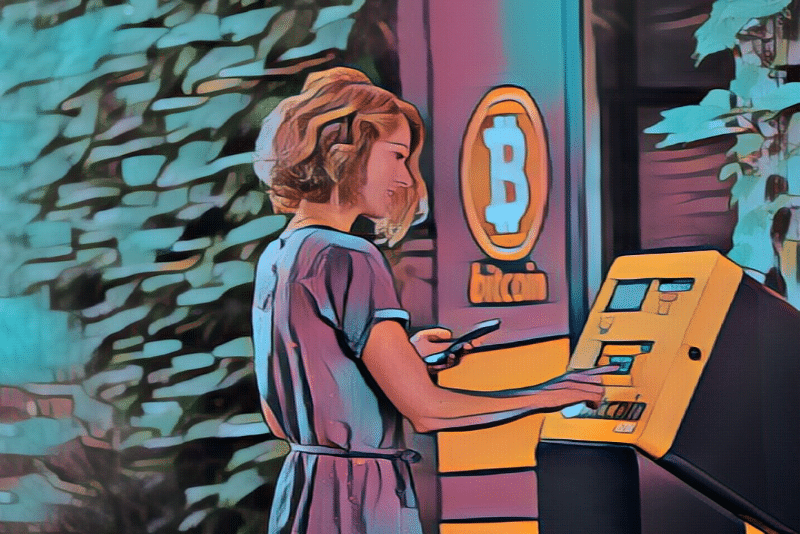 A Guide to Selling Bitcoin at an ATM

The process of selling your Bitcoin is pretty much the same as buying it. The only difference is you will have to choose the option to sell – rather than buy – Bitcoin at the ATM. It is also important to ensure that the machine you’re using supports Bitcoin sales.

Follow the steps below to sell your BTC at a Bitcoin ATM:

Step 1: Locate a 2-way Bitcoin ATM near you

Step 3:  Fill out your wallet information

At the ATM, you will be asked to enter your wallet information. You can do this via a QR code or an alphanumeric key. If you’re selling Bitcoin, you will need to provide the receiving address, so the ATM knows where to send the cash.

When you’re selling Bitcoin, you have to provide the receiver’s address, so the ATM knows where to send the cash.

After you enter your wallet information, you will be requested to log in to your account at the Bitcoin ATM. The login process is usually pretty simple.

Select the option to sell Bitcoin once you’ve logged in. After that, you’ll be prompted to enter the quantity of Bitcoin you’d like to sell. The machines usually have a minimum and maximum amount per transaction that you can sell.

Once you enter the amount of Bitcoin you want to sell, choose the option to withdraw cash. The ATM will then dispense the equivalent amount of cash, and that’s it! You have successfully sold Bitcoin via a Bitcoin ATM.

Again, It is important to remember that not all Bitcoin ATMs are the same, so the steps may be slightly different.

How much does a BTC ATM charge?

Per transaction, there are also minimum and maximum limits. Most Bitcoin ATMs, for example, charges a minimum of $20 for every transaction. Depending on the ATM operator, daily limits might range from $3000 to $9000.

These ATMs impose fees in accordance with the laws of the states in which they operate. As a result, the fees may differ depending on the state you live in. In general, Bitcoin ATM operators must register with the Financial Crimes Enforcement Network and follow the Anti-Money Laundering provisions of the Bank Secrecy Act.

Some Bitcoin ATMs also allow users to buy or sell bitcoins without paying any fees. These machines, on the other hand, are frequently difficult to come across. Even if an ATM does not charge a service fee, the price of Bitcoin on these machines is generally higher than the current market rate on exchanges.

This is due to the fact that the ATM operator must also make a profit. Therefore, it’s usually not worth it to buy or sell Bitcoin on a fee-free ATM.