Due to these limitations of the proof of work consensus mechanism, a lot of methods are coming up. The aim is to bypass these limitations by starting with cutting the amount of energy used for transaction validation.

So, just like banking and other fintech institutions, the blockchain cryptocurrency networks must make sure that no player in the network spends the same money two times.

Furthermore, the consensus mechanism will not allow the destruction or deviation of the network via a hard fork. In centralized ecosystems, some central bodies and authorities are responsible for validating transactions.

The opposite is the case in the cryptocurrency ecosystem. It is an ecosystem that is community-based, and because of that, the community members will need to be included in the validation of transactions.

For this to happen, all the players have to reach a consensus. It is only when everyone reaches a consensus that transactions will be verified and added to blocks.

To cryptographically get consensus on the various cryptocurrency networks we have today, the two major consensus mechanisms used are PoW and PoS. These two mechanisms are the main validation mechanisms for DeFi (Decentralized Finance) projects today.

While PoW focuses on the different agreeing networks to validate transactions, the PoS has a slightly different approach. The PoS is a newer consensus mechanism that validates transactions in DeFi projects.

PoS seems to have more relevance in our technological world today, but building the network of consensus is not as simple as validating transactions using the PoW network consensus.

Proof of Work and How it Works

He used the PoW concept for validating new blocks of data on the Bitcoin blockchain network.

A node is a personal device in the blockchain network used for sending, forwarding, and receiving information within a network of connecting tools. Any user whose node solves the mathematical equation fastest will be the one to link the new block to the old block using cryptography. 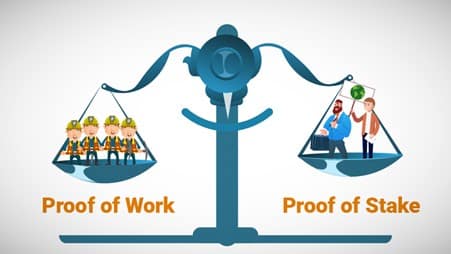 Proof of Stake and How it Works

In 2011, people who were concerned with the disadvantages of the PoW mechanisms like large energy consumption, high transaction cost, large computer equipment, and low transaction speed came up to talk about new methods of consensus mechanism.

The discussion took place on the Bitcointalk forum. They proposed a consensus mechanism that will not require tangible work to validate transactions, rather transactions will be validated using an existing verified stake in the network.

Here is a brief description of how the PoS Consensus mechanism works. Let’s assume that we have 4 miners; A, B, C, and D.

The reason is this; the more of the blockchain’s native currency you own, the more your chances of validating transactions and adding new blocks. So the miner with more stakes emerges the winner.

So, the very clear difference between these two transaction consensus mechanisms is the way they distribute and reward verification of transactions. While PoW works with solving mathematical computations using high energy and fast nodes, PoS works by buying more native tokens and staking them for transaction validations.