NFT Scams: How to Protect Yourself from them (2022)

People are gaining money by exchanging Non Fungible tokens, which are digital assets, and the digital world is being completely taken over by this phenomenon. On the other hand, there are a large number of cons that are designed to separate individuals and companies from their cash.

Threat actors stole more than 600 million dollars from Sky Mavis in March of 2022. Sky Mavis is the company that developed the popular NFT-based game Axie Infinity. To steal money from people’s digital wallets, the threat actors hacked their private keys and utilised those to make withdrawals.

What exactly is an NFT?

A nonfungible token, often known as an NFT, is a special kind of digital asset that is stored on a blockchain. In contrast to other forms of bitcoin, these digital assets cannot be exchanged for one another and serve as an authentication method for ownership. Every transaction that takes place on a blockchain is recorded in a distributed digital ledger.

Each NFT is one of a kind and cannot be replicated or substituted in any way. The following are some examples of different kinds of NFTs:

NFT designers explain the high prices for JPEGs with one word: usefulness. Owning a digitally tokenized piece of art can get you into exclusive online clubs, gaming groups, Discord chat rooms, and interactive events.

Theoretically. NFTs are new and dirty. NFTs present profitable opportunities for scammers due to the sheer volume of money exchanged.

We explain the most typical NFT scams, how to avoid them, and why they’re so common.

Common NFT scams and their Avoidance You will need to create an account for a wallet that uses the Ethereum blockchain in order to purchase your first non-fungible token (NFT). For NFT collectors, MetaMask is perhaps the most widely used Ethereum wallet currently available.

However, users of MetaMask were recently targeted in a phishing scheme that involved fraudulent adverts that sought users for the 12-word security seed phrases or private wallet keys to their cryptocurrency wallets (a big red flag).

Learn More: 10 Ways To Secure Your Bitcoin And Crypto Wallet

There are also false malicious pop-ups that are functioning via Discord, Telegram, and other public forums. These pop-ups link to normal-looking login pages, such as those seen on MetaMask or other prominent websites.

If a malicious party is successful in phishing you, they will be able to steal all of the cryptocurrency stored in your digital wallet if they get their hands on your private information.

Don’t respond to direct messages from founders, celebrities, or influencers. C-level personnel won’t DM you unless you message them first or agree in a public Twitter thread or Discord channel. It’s like when your parents told you not to give telemarketers your information. If someone DMs you, don’t click links or expose secrets.

Scams using bids are most common on the secondary market after an investor has already purchased an NFT and is looking to resell it to the highest possible bidder. After you have listed your NFT for sale, prospective buyers may decide to use a different cryptocurrency without informing you. For your preferred NFT, you might receive $5 rather than the standard payout of 5 ETH (about $15,000 to $20,000).

Check the currency that is being utilised, and never settle for a bid that is lower than what you want.

It is important to keep in mind that minting a piece of artwork as a non-fungible token (NFT) is not the same as holding ownership of the intellectual property (IP) associated with that piece of artwork.

Anyone, regardless of whether or not they possess the rights to the underlying intellectual property, is able to convert any photo or image into an NFT by using the user-friendly software provided by OpenSea.

Swindlers and other dishonest individuals might very easily steal an artist’s work and then start a bogus account on OpenSea, where they would post the stolen artwork for auction. Because of this, once the community finds out what the fraudster is doing, your NFT will practically be worthless, and there is no way to get your money back.

Before buying an NFT, verify sure the account is validated. On OpenSea or other NFT markets, look for the blue checkmark next to the artist’s profile photo. If not, try Twitter, their website, or other social media. Ask them if you may buy their painting and if you have the correct user profile. Ask if the artist or NFT project has a Discord channel.

Another grey area, is not a fraud. Purchased NFTs can disappear. The blockchain contract (NFT) is different from the artwork. Consider uploading an original mp3 to OpenSea. When a collector wants to acquire it, they put in a bid and pay in ether, which creates a smart contract.

The blockchain mints smart contracts. The uploaded file’s content and metadata are separate. NFTs are merely about owning an asset, which might be anything.

If you keep smart contract artwork, house deeds, or other digital assets on a centralised site, make sure it’s trustworthy. And avoid NFTs that link to an image URL. Whatever is on the URL can be modified without your permission, leaving you with a useless token. 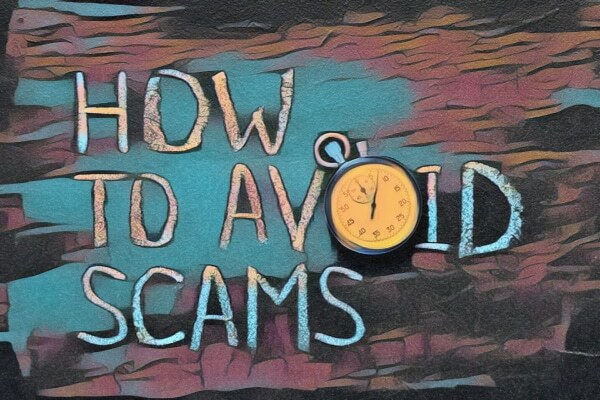 Users are becoming more knowledgeable about the potential dangers of trading and the best practices for protecting their NFTs.

However, if you now own an NFT or are considering purchasing one or more in the near future, it is imperative that you are aware of how to prevent falling victim to an NFT scam. You, as a user, have the ability to put up a number of preventative steps to guard against the possibility of your assets being stolen.

To begin, it is critical to have an understanding of the tasks at hand. Reviewing the transaction history of the NFT you intend to buy is a good idea if you want to steer clear of pump-and-dump schemes.

Additionally, seek the creator’s contact information and conduct a background investigation on them. If all of the transactions were completed close to one particular day, then a warning sign ought to be triggered.

Always bear in mind that your personal information belongs to you, especially in light of the fact that we are discussing phishing scams. Never surrender the keys to your wallet to anyone else, and ignore any dubious offers or requests to get in touch with you.

It goes without saying that you should always use two-factor authentication to secure your accounts; it’s the bare minimum you can do.

When it comes to the artwork that has been stolen, there are occasions when you are unable to do anything. Verifying the accounts of the community, the social media messaging, and the creator is something you can do without a doubt.

Do your homework, like you would in any other situation. A number of different NFT marketplaces are in the process of building new technologies, which they will use to search public blockchains for fake NFTs.

Last but not least, NFT scammers can be identified by the absence of a blue checkmark next to their usernames.

Why are NFT scams so common?

Nelson Merchan Jr., CEO of blockchain PR firm Light Node Media, said NFTs are at the ICO stage. Anyone can hire an artist to develop NFTs and then hype crypto influencers.

This “hype” makes it hard to tell who in the NFT sphere is a trustworthy creator and who is a bad actor, especially because many collectors and makers utilise cartoon NFT profile images (PFPs) and anonymous Twitter identities.

“People are [developing] NFTs and paying $50,000 to $60,000 – sometimes less – then generating a million dollars in NFT sales,” Merchan said. Once an NFT developer or community founder promises $1 million, collectors expect them to follow through.

Merchan: “They’re doing well.” The NFT’s value will be zero. No trading, game, or community. They have a large treasury but a failed idea. Worrying.”

NFTs are investment-worthy. Count your steps and take safety precautions to discover a new universe.

We’re in the middle of the NFT roller coaster, but many still debate NFT investments vs. scams. Nonfungible coins’ $40 billion market worth speaks for themselves. Many say NFTs are pricey PNG files and fraud, however, the reverse is true.

Some NFTs are scams and some platforms are dishonest. All NFTs aren’t scams, though. Life’s risks include shady automobile salespeople. When investing in an NFT, the value isn’t in the image. The underlying asset provides NFTs value.

- Advertisement -
Previous article
Kucoin Exchange Review: A Complete Guide To Best Exchange
Next article
Wrapped Ethereum (wETH): what is it and how does it work?