Cryptojacking: What is it, and Why Attacks on it are Increasing Globally?

Cryptojacking refers to a cyber attack where an attacker hijacks and controls an electronic device, for example, a computer. The endpoint of a cryptojacking attack is to use the user’s resources for cryptocurrency mining.

On the other end, cryptocurrency mining is legal. So, it is like using an illegitimate method to carry out a legitimate process for results. Primarily, crypto mining refers to the process of competition that people (miners) get involved in to verify transactions.

Verifying transactions will lead to more cryptocurrency being released into circulation. Indeed, the system rewards the miner who verifies a transaction with cryptocurrency. This method is how new cryptocurrencies come into the crypto ecosystem.

Between 2021 and the first half of 2022, cryptojacking increased by over 30%. Based on SonicWall, there have been losses up to the tune of $66.7 million to cryptojacking.

The company is a cyber security firm based in the United States. The data we had last year on cryptojacking is nothing compared to what we have in the ecosystem this year.

SonicWall further added in its report on cryptojacking, “While volume increases were widespread, some business sectors were hit harder than others, such as the finance industry, which saw a rise of 269%.”

The Meaning of Cryptojacking

In summary, cryptojacking means a cyberattack where a computation device is hijacked. The person who attacks the computer becomes the controller of the computer. Unlike most cases, the reason for hijacking a computer in cryptojacking is to use its resources for cryptocurrency mining.

Automatically, the user will give the attacker access to that device without knowing. Immediately, the attacker will have to start controlling the computer’s data. The attacker can even lock or sign the user out from the device.

The Reason for Cryptojacking

Cryptocurrency mining is like the minting of fiat money. It is a way to release more cryptocurrencies into the crypto ecosystem. Before cryptocurrencies are mined, the miners (computer nodes) will have to solve complex mathematical problems. So, it is like a whole class trying to find the answer to a test question.

However, in this case, even if everyone gets the answer, the mining algorithm will pick only one miner. The basis for selecting the miner is that the person will be the first to provide the correct answers. 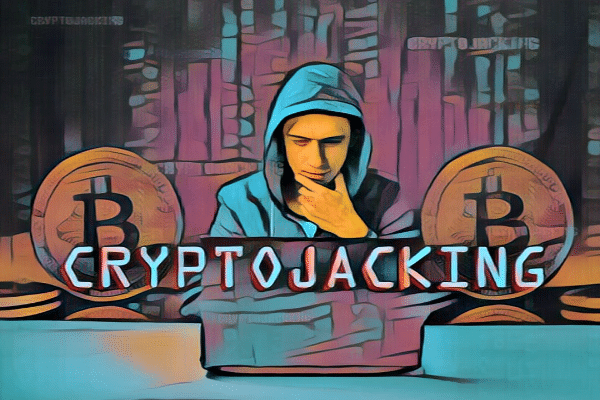 The cryptocurrency mining race involves cracking a hexadecimal code of 64 numbers. You will need a computer with very high computational power to crack the code. This computer must have the latest mining software installed on it. Also, it must have the recent hardware configurations. Also, such computers consume plenty of electric energy to keep them functioning and solving the maths equation.

The Reason for the Hike in Cryptojacking Occurences

According to a threat report by SonicWall cyber Security, a ransomware attack crackdown pushes cybercriminals to find alternative routes. For cryptojacking, the cybercriminal will face low risk and higher rewards.

The Vice President of SonicWall Europe, Middle East, and Africa (EMEA) mentioned that cryptojacking is a pleasing second thought for cybercriminals and their gangs. He further said, “it has a lower potential of being detected by the victim; unsuspecting users across the world see their devices get unaccountably slower, but it’s hard to tie it to criminal activity, much less point to the source.”

Furthermore, the Threat Report by SonicWall stated, “Unlike ransomware, which announces its presence and relies heavily on communication with victims, cryptojacking can succeed without the victim ever being aware of it,”.

Should The Increased Cryptojacking Rate Be a Concern?

The factual answer is YES. The rate of cryptojacking is increasing because most people whose systems get attacked by these cybercriminals are almost unaware of what is happening. Some signs these users will notice may be slowing down of devices, their battery devices draining faster, or their devices heating up unnecessarily.

Another key reason why cryptojacking should be a concern is that the crime now affects organizations. These cybercriminal gangs have moved from individuals to small, medium, or even large organizations.

Finally, according to Interpol, “The primary impact of cryptojacking is performance-related, though it can also increase costs for the individuals and businesses affected because coin mining uses high levels of electricity and computing power.”

So, if you know that you use a high-performance computer, ensure you verify all links from unknown sources before clicking them. Also, ensure that your malware prevention and antivirus are up to date. By all means, be alert, and keep your system from cryptojacking at all times.

WHAT IS A CRYPTO DUSTING ATTACK AND HOW DO I AVOID IT?

SCAM PROJECTS AND HOW TO IDENTIFY THEM