Decentralized Applications (dApps): Everything You Need To Know

Decentralized applications (dApps) are digital programs or applications powered by blockchain technology of peer-to-peer computer networks. dApps are not controlled by a single party or authority.

Decentralized applications mostly run on the Ethereum blockchain, and they can carry out functions various in industries. dApps can function in the fintech industry, social media, and even the gaming industry.

Decentralized applications offer users high levels of privacy, and flexible development. dApps also ensure that the activities of the user are above censorship.

Among many advantages, major drawbacks that decentralized applications have are scalability difficulty, user interface development challenges, and code modification difficulties.

Most normal web applications we have today are run by single organizations. The company is responsible for running and operating these applications.

The companies that run these apps are fully responsible and in total control of these apps and their functions. On one end of the app, there are multiple users, but at these apps’ backend, the organizations responsible for the apps are in full control.

In a peer-to-peer network, you will have multiple system players feeding on content, giving content, or carrying out the two functions. While talking about cryptocurrencies, Decentralized Applications functions on the public open-source blockchain network.

The blockchain environment is free from central control, decentralized, and away from personal interferences.

The truth is that decentralization does not mean that the dApps will not have developers that will upgrade the app or operate the development.

The decentralization is that the operators or team will not be able to control or change the information that users of the system share.

For example, let us say you create a decentralized application like Twitter on blockchain technology, when users post messages, you will not be able to delete them. Nothing has the power to alter the message, including the team in charge of the app development.

Most of the advantages of dApps revolve around the protection of user data privacy. Decentralized applications will allow users to explore all functionalities that lie within the apps without submitting all their details.

People who are supporters of a free speech society believe developers should build social media platforms as decentralized applications built on blockchain technology.

Speeches on social media platforms running on blockchain technology will give users access to create messages when they want without censorship. No one will be able to delete messages or stop users from publishing their messages.

When it comes to a flexible blockchain for developing dApps, the Ethereum blockchain comes to mind first.

The Ethereum blockchain provides developers with the right infrastructures to help them focus their energy on finding new ways to implement these digital applications.

The Ethereum blockchain infrastructure is sparking up a lot of decentralized application development in various industries like gaming, social media, financial technology, banking, and even eCommerce.

The advent of dApps is very recent. The innovative technology is still gaining ground and taking baby steps. Therefore, a lot of things are still in their stages of experimentation, and these things can face some problems and unforeseen circumstances.

Will dApps scale effectively, especially with applications that need a good amount of network overloads and computations? Remember that these factors may lead to network congestion. 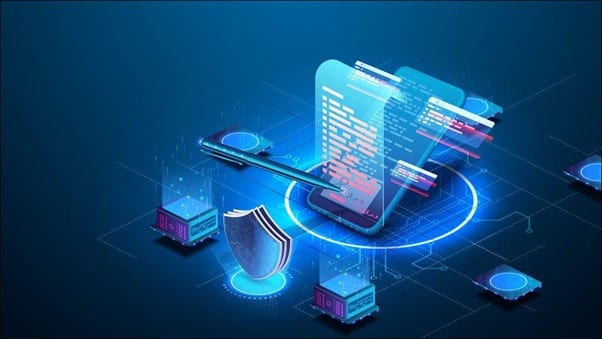 Another major concern is the capacity to develop a dApps user interface that is friendly. Most of these centralized applications have interfaces that users can use without difficulty.

The performance levels of these applications must be better or at least equal to the performance of their centralized counterparts.

Finally, the third challenge that poses a disadvantage for dApps is modifying codes. The modification of codes is a very serious limitation of dApps.

Once you develop a decentralized application, you should keep making progressive changes so that the enhancements and security will be up to date.

This constant update can get very difficult for decentralized applications because, unlike their centralized counterparts, the modification of their codes is not easy.

What Are Ethereum Decentralized Applications?

Decentralized applications (dApps) run in a peer-to-peer computer network or blockchain technology. It allows users to interact and carry out transactions with one another by excluding middlemen and regulatory authorities.

Users of decentralized applications pay the developers of the dApps some amount of cryptocurrency to use the applications’ source codes.

Examples of dApps are Peepeth (a social media platform), Cryptokitties (a gaming platform), and MarketDAO (a decentralized credit service)

To use centralized apps, you will have to download a copy of the application and transfer or receive data using the servers that these companies control.

Decentralized applications are shaping the narratives of operations in many industries. Although there are disadvantages here and there, the advantages sure outweigh the disadvantages.

Furthermore, the disadvantages still exist because the technology is still new. With time and more developments, these problems will be things of the past for dApps

This innovation is rapidly changing the operations in many industries, and those who want to position themselves for the changes in the future ought to start learning about decentralized applications now.

All About The Layer 1 In Blockchain

Most Important Blockchains in 2022

Mufasa
Mufasa is the lead writer at CryptoMufasa who likes to share all the latest info on the crypto world with you! Mufasa Enjoys enjoys a good read and recommendations so don't forget to comment on the posts and let him know.
Previous articleDEX (Decentralized Exchange) vs. CEX (Centralized Exchange)
Next articleThe Indian Cryptocurrency Exchange Places Restrictions On Deposits And Withdrawals Of Crypto.